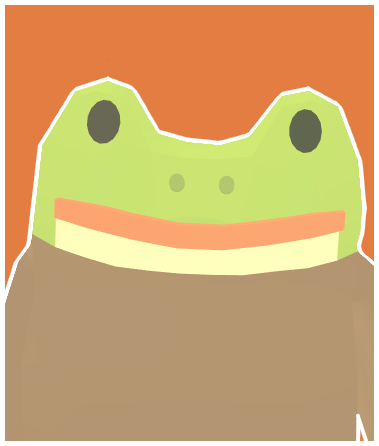 --The Mystery of the Wobby Bridge--
Date: Recently
Location: Longswamp


Hello to my fans and welcome to another frog blog about my time when I am a frog who solves mysteries. This time it's about the MYSTERY OF THE WOBBLY BRIDGE. I was called to Longswamp by an old fisherman who only fished at night. He told me that every night, soon after the sun went down, he would hear a mysterious noise and the bridge would wobble violently, meaning all his fish would fall back into the river. He was extremely bummed out about it!! So I (The Detective) went to solve the mystery. Perhaps there was a crime afoot...

I decided to stake out the bridge wearing a mysterious disguise. I covered myself in leaves and pretended to be a pile...of leaves. A child on a walk tried to jump on me. In retrospect, not my best idea, but I persevered despite this. As night fell, the fisherman got to work catching fish. The air was quiet, and so was the bridge. One hour, and no wobbles. I was getting very itchy (from the leaves) and was becoming impatient. Suddenly... A NOISE. The bridge was dark, so I couldn't see what was happening, but the bridge was wobbling so violently I thought I would fall off like the fish.

I stood up and brushed off my brilliant disguise. With a great effort to stay stable, I followed the source of the wobbling accross the bridge. As I drew closer, I saw a figure! Being careful not to be in danger, I drew my weapon. My magnifying glass-- the greatest weapon of all against crimes. I would never have a real weapon as you would know unless you are a peanut.

Anyway it turned out the figure was just a kangaroo having a big bounce!! I talked to the kangaroo and she said she loves bouncing on the bridge at night but didn't know there was anyone else nearby and agreed to yell out before having her bounce so the fisherman could secure his fish. ANOTHER MYSTERY SOLVED!!

Signing off!! - The Detective

MysteryMonkey49: how can he see the fish if its at nigt

BugGuy: can you do one about a bug mustery. i am a bug and i like to hear about that things. thansk


Hello to my fans and welcome to my account of what happened when I went to the Boogie Lodge and there was a peril. Boy is this a mystery... It is! I was called to the Boogie Lodge when I heard about the peril. It turned out that someone had stolen the disco ball and replaced it with a normall basketball (not reflective at all) which was a real shame as nobody wanted to boogie below a basketball. This was a tricky case as there was no evidence except for a small hat, much too small for even me. A small hat, perhaps, but not a small crime. To find the culprit, I knew I had to look low rather than high. I got my trusty magnifying glass and squatted close to the ground to find some more clues.

Suddenly-- tiny foot prints! I followed their tiny tracks until I found a tiny hole. Knowing that there might be criminals in the hole, I bravely said "HELLO IS THERE ANYONE INSIDE THIS HOLE!!!!!!!" and I heard a tiny "yes". Startled, I enquired "Do you happen to have the missing disco ball?" into the hole. Some time passed before a small ant boy exited the hole. He looked apologetic.

"We didn't know it was a disco ball! We thought it was a mirror for many tiny friends like us."

Pleased I had solved the mystery, I offered to get the tiny friends their own disco ball and return the missing one to the Boogie Lodge. ANOTHER MYSTERY SOLVED BY ME!!!

Signing off. - The Detective

x_JOLLYJELLY_x: hhow did they get it in the hole

The Detective: he was innocent

BugGuy: like if you came becase of the bugs in this story. from bug blog


Hi to my fans reading my blog about being a frog that solves mysteries. This time it's a mystery about an entire FOREST being stolen! I recieved a call from the mayor of Witchtown and was told to hurry fast, as nobody in the town could go and do their witchy activities in the woods. This was an urgent case to be solved so of course they hired me, The Detective!

This case seemed almost impossible to solve. Everyone in the town was distressed at not being able to find the forest. When I asked "where did you last see it?" they would just give me weird looks. It seemed like I was on my own for this one. I looked low and high for clues but every lead was a dead end.

I was almost ready to give up when, in the distance, I saw the tops of trees. I was puzzled-- surely that couldn't be the forest? I headed toward the trees and as I got closer it was becoming clear that it was, in fact, a forest! What to heck! I quickly rushed back and asked the residents of the town if that was the forest they were looking for. They paused for a moment, puzzled, and then said "yup!". I was also puzzled-- the forest had no signs of being moved. Though the forest was back, I was troubled by not knowing where it went in the first place. After much investigation, I discovered that the forest was not stolen at all! In fact, the town itself had been moved 180 degrees as a prank by the neighbouring residents of Wizard Grove. It was all a cruel trick! But, as no crime was technically committed, I left Witchtown safe in the knowledge that the forest hadn't moved at all. Another mystery solved!!!

MysteryMonkey49: WHAT DO U MEAN THEY TURNED THE TOWN AROUND sorry caps lock

x_JOLLYJELLY_x: is that a real story

BestCommenter7: ive nevr been to witchtown. im from pumpkinville. am i allowed to say that on the interntet